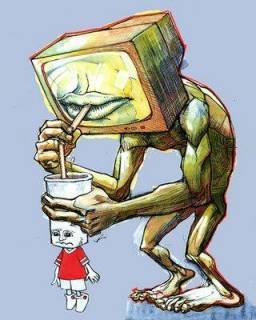 For many years, actually since 2009, I haven’t had a TV in my house. I just simply did not agree with the widely held “universal truth” that TV is a must have for the children. I prefer that we talk,read or play. I hope I made the right choice.

Children are very impressionable and it is important to control what their minds are exposed to. Time spent watching television takes away from important activities such as reading, homework, playing, exercise, family interaction, and social development.

While television can entertain, inform, and keep our children company, it may also influence them in undesirable ways:

Children who consistently spend more than 4 hours per day watching TV are more likely to be overweight. When they’re staring at screens, kids are inactive and tend to snack. They’re also bombarded with ads that encourage them to eat unhealthy foods like chips and drink empty-calorie soft drinks like sodas that often become favorite snack foods.

Kids who watch violent acts on TV are more likely to show aggressive behavior. Many violent acts are caused by the “good guys,” whom kids are taught to admire. In fact, in video games the hero often succeeds by fighting with or killing the enemy. Programs that show huge wrestlers fighting with each other to excite a screaming public and even seemingly innocent cartoons like Tom and Jerry where they are seen constantly bashing each other send certain messages to children. Through such violent programs children get the idea that violence is a means to power.

TV is full of content that depicts risky behaviors (such as drinking alcohol, doing drugs, smoking cigarettes, and having sex at a young age) as cool, fun, and exciting.
Studies have shown that teens who watch lots of sexual content on TV are more likely to initiate intercourse or participate in other sexual activities earlier than peers who don’t watch sexually explicit shows.

That’s why it’s so important for parents to keep tabs on their kids’ screen time and set limits to ensure they’re not spending too much time in front of a television.

What is Recommended?
Dr Kigonya, a renown paediatrician in town recommends these guidelines for screen time:

Babies and toddlers up to 18 months old: No screen time, with the exception of video-chatting with family and friends.

Toddlers 18 months to 24 months: Some screen time with a parent or caregiver.

Nursery school : No more than 1 hour a day of educational programming, together with a parent or other caregiver who can help them understand what they’re seeing.

Children and adolescents 5 to 18 years: Parents should place consistent limits on screen time, which includes TV, social media, and video games. Media should not take the place of getting enough sleep and being physically active

Reading and Writing made Easy on the EduTab